Skip to content
Homepage / Discuss / Which is the preferred way to concatenate a string in Python?

Which is the preferred way to concatenate a string in Python?

Since Python’s string can’t be changed, I was wondering how to concatenate a string more efficiently?

While writing this question, I found a good article talking about the topic.

But it’s in Python 2.x., so the question would be did something change in Python 3?

The best way of appending a string to a string variable is to use + or +=. This is because it’s readable and fast. They are also just as fast, which one you choose is a matter of taste, the latter one is the most common. Here are timings with the timeit module:

However, those who recommend having lists and appending to them and then joining those lists, do so because appending a string to a list is presumably very fast compared to extending a string. And this can be true, in some cases. Here, for example, is one
million appends of a one-character string, first to a string, then to a list:

OK, turns out that even when the resulting string is a million characters long, appending was still faster.

The end string, therefore, ends up being about 100MB long. That was pretty slow, appending to a list was much faster. That that timing doesn’t include the final a.join(). So how long would that take?

Oups. Turns out even in this case, append/join is slower.

So where does this recommendation come from? Python 2?

Well, append/join is marginally faster there if you are using extremely long strings (which you usually aren’t, what would you have a string that’s 100MB in memory?)

But the real clincher is Python 2.3. Where I won’t even show you the timings, because it’s so slow that it hasn’t finished yet. These tests suddenly take minutes. Except for the append/join, which is just as fast as under later Pythons.

Yup. String concatenation was very slow in Python back in the stone age. But on 2.4 it isn’t anymore (or at least Python 2.4.7), so the recommendation to use append/join became outdated in 2008, when Python 2.3 stopped being updated, and you should have stopped using it. 🙂

(Update: Turns out when I did the testing more carefully that using + and += is faster for two strings on Python 2.3 as well. The recommendation to use ''.join() must be a misunderstanding)

However, this is CPython. Other implementations may have other concerns. And this is just yet another reason why premature optimization is the root of all evil. Don’t use a technique that’s supposed “faster” unless you first measure it.

Therefore the “best” version to do string concatenation is to use + or +=. And if that turns out to be slow for you, which is pretty unlikely, then do something else.

So why do I use a lot of append/join in my code? Because sometimes it’s actually clearer. Especially when whatever you should concatenate together should be separated by spaces or commas or newlines.

If you are concatenating a lot of values, then neither. Appending a list is expensive. You can use StringIO for that. Especially if you are building it up over a lot of operations.

If you already have a complete list returned to you from some other operation, then just use the ''.join(aList)

From the python FAQ: What is the most efficient way to concatenate many strings together?

str and bytes objects are immutable, therefore concatenating many
strings together is inefficient as each concatenation creates a new
object. In the general case, the total runtime cost is quadratic in
the total string length.

To accumulate many str objects, the recommended idiom is to place them
into a list and call str.join() at the end:

(another reasonably efficient idiom is to use io.StringIO)

To accumulate many bytes objects, the recommended idiom is to extend a
bytearray object using in-place concatenation (the += operator):

Edit: I was silly and had the results pasted backwards, making it look like appending to a list was faster than cStringIO. I have also added tests for bytearray/str concat, as well as a second round of tests using a larger list with larger strings. (python 2.7.3)

In Python >= 3.6, the new f-string is an efficient way to concatenate a string.

Using in place string concatenation by ‘+’ is THE WORST method of concatenation in terms of stability and cross implementation as it does not support all values. PEP8 standard discourages this and encourages the use of format(), join() and append() for long term use.

As quoted from the linked “Programming Recommendations” section:

For example, do not rely on CPython’s efficient implementation of in-place string concatenation for statements in the form a += b or a = a + b. This optimization is fragile even in CPython (it only works for some types) and isn’t present at all in implementations that don’t use refcounting. In performance sensitive parts of the library, the ”.join() form should be used instead. This will ensure that concatenation occurs in linear time across various implementations.

The recommended method is still to use append and join.

If the strings you are concatenating are literals, use String literal concatenation

Since this happens at the syntax layer it uses zero concatenation operators.

You write this function

Then you can call simply wherever you want

As @jdi mentions Python documentation suggests to use str.join or io.StringIO for string concatenation. And says that a developer should expect quadratic time from += in a loop, even though there’s an optimisation since Python 2.4. As this answer says:

If Python detects that the left argument has no other references, it calls realloc to attempt to avoid a copy by resizing the string in place. This is not something you should ever rely on, because it’s an implementation detail and because if realloc ends up needing to move the string frequently, performance degrades to O(n^2) anyway.

I will show an example of real-world code that naively relied on += this optimisation, but it didn’t apply. The code below converts an iterable of short strings into bigger chunks to be used in a bulk API.

This code can literary run for hours because of quadratic time complexity. Below are alternatives with suggested data structures: 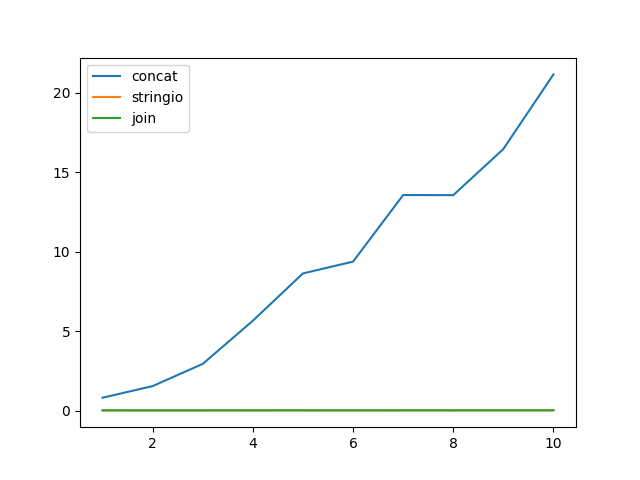 How do I run a Python program in the Command Prompt in Windows 7?

How can I use a DLL file from Python?