I’ve got Pycharm 4 running on my Linux (Ubuntu 14.04) machine. In addition to the system python, I’ve also got Anaconda installed. Getting the two to play nicely together seems to be a bit of a problem… PyCharm provides some interesting integration for virtualenvs and pip, but the Anaconda Python distribution seems to prefer using its own conda tool for both activities.

Or am I going to have to choose between using Anaconda (and having a more recent and up-to-date python than may come with the system), and being able to use PyCharm’s features to their fullest extent?

I know it’s late, but I thought it would be nice to clarify things: PyCharm and Conda and pip work well together.

Just manage Conda from the command line. PyCharm will automatically notice changes once they happen, just like it does with pip.

Now to activate your new environment from PyCharm go to file > settings > project > interpreter, select Add local in the project interpreter field (the little gear wheel) and hunt down your python interpreter. Congratulations! You now have a Conda environment with pandas and bokeh!

OK… go back to your interpreter in settings. Magically, PyCharm now sees scikit-learn!

And the reverse is also true, i.e. when you pip install another package in PyCharm, Conda will automatically notice. Say you’ve installed requests. Now list the Conda packages in your current environment:

The list now includes requests and Conda has correctly detected (3rd column) that it was installed with pip.

This is definitely good news for people like myself who are trying to get away from the pip/virtualenv installation problems when packages are not pure python.

NB: I run PyCharm pro edition 4.5.3 on Linux. For Windows users, replace in command line with in the GUI (and forward slashes with backslashes). There’s no reason it shouldn’t work for you too.

EDIT: PyCharm5 is out with Conda support! In the community edition too.

as per @cyberbikepunk answer pycharm supports Anaconda since pycharm5!

Have a look how easy is to add an environment: 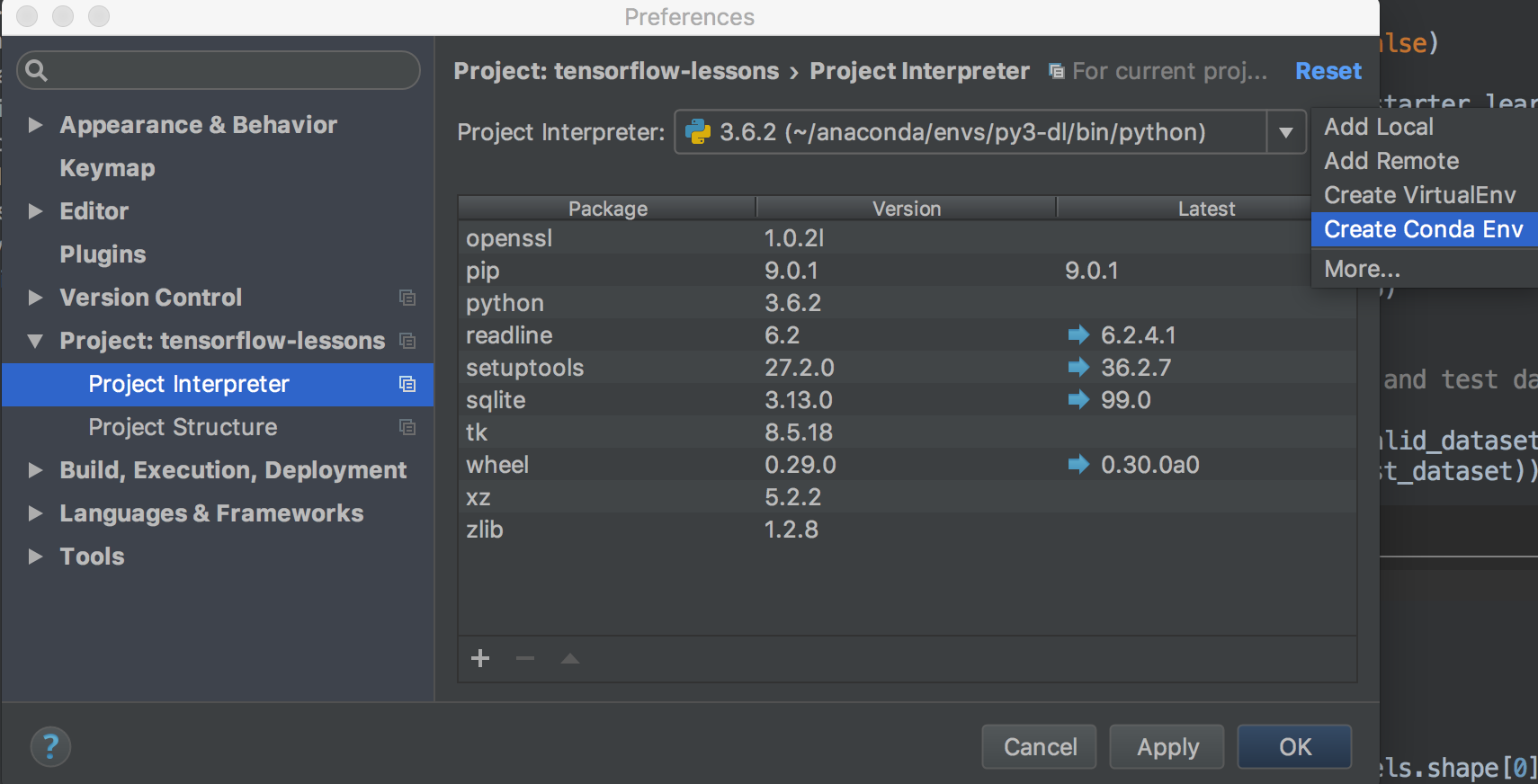 Continuum Analytics now provides instructions on how to setup Anaconda with various IDEs including Pycharm here. However, with Pycharm 5.0.1 running on Unbuntu 15.10 Project Interpreter settings were found via the File | Settings and then under the Project branch of the treeview on the Settings dialog.

this might be repetitive.
I was trying to use pycharm to run flask – had anaconda 3, pycharm 2019.1.1 and windows 10. Created a new conda environment – it threw errors.
Followed these steps –

Obviously kept the correct python interpreter (the one in the environment) everywhere.

TensorFlow saving into/loading a graph from a file