TCP/IP is a stream-based protocol, not a message-based protocol. There’s no guarantee that every send() call by one peer results in a single recv() call by the other peer receiving the exact data sent—it might receive the data piece-meal, split across multiple recv() calls, due to packet fragmentation.

You need to define your own message-based protocol on top of TCP in order to differentiate message boundaries. Then, to read a message, you continue to call recv() until you’ve read an entire message or an error occurs.

One simple way of sending a message is to prefix each message with its length. Then to read a message, you first read the length, then you read that many bytes. Here’s how you might do that:

Then you can use the send_msg and recv_msg functions to send and receive whole messages, and they won’t have any problems with packets being split or coalesced on the network level.

You can use it as: data = recvall(sock)

The accepted answer is fine but it will be really slow with big files -string is an immutable class this means more objects are created every time you use the + sign, using list as a stack structure will be more efficient.

This should work better

Most of the answers describe some sort of recvall() method. If your bottleneck when receiving data is creating the byte array in a for loop, I benchmarked three approaches of allocating the received data in the recvall() method: 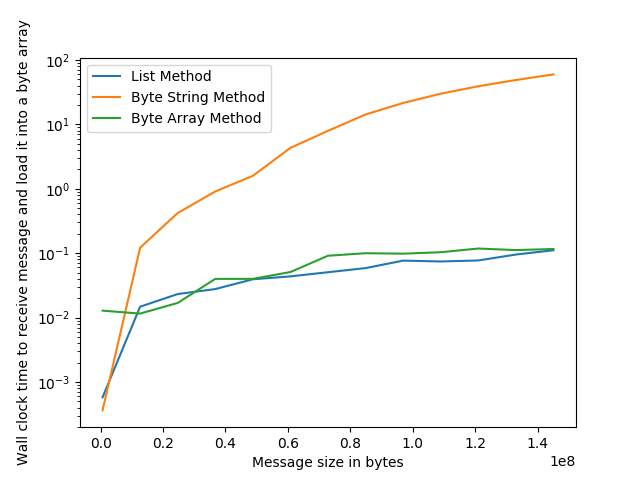 You may need to call conn.recv() multiple times to receive all the data. Calling it a single time is not guaranteed to bring in all the data that was sent, due to the fact that TCP streams don’t maintain frame boundaries (i.e. they only work as a stream of raw bytes, not a structured stream of messages).

See this answer for another description of the issue.

Note that this means you need some way of knowing when you have received all of the data. If the sender will always send exactly 8000 bytes, you could count the number of bytes you have received so far and subtract that from 8000 to know how many are left to receive; if the data is variable-sized, there are various other methods that can be used, such as having the sender send a number-of-bytes header before sending the message, or if it’s ASCII text that is being sent you could look for a newline or NUL character.

Disclaimer: There are very rare cases in which you really need to do this. If possible use an existing application layer protocol or define your own eg. precede each message with a fixed length integer indicating the length of data that follows or terminate each message with a ‘n’ character. (Adam Rosenfield’s answer does a really good job at explaining that)

With that said, there is a way to read all of the data available on a socket. However, it is a bad idea to rely on this kind of communication as it introduces the risk of loosing data. Use this solution with extreme caution and only after reading the explanation below.

Now the if not packet: line is absolutely critical!
Many answers here suggested using a condition like if len(packet) < BUFF_SIZE: which is broken and will most likely cause you to close your connection prematurely and loose data. It wrongly assumes that one send on one end of a TCP socket corresponds to one receive of sent number of bytes on the other end. It does not. There is a very good chance that sock.recv(BUFF_SIZE) will return a chunk smaller than BUFF_SIZE even if there’s still data waiting to be received. There is a good explanation of the issue here and here.

By using the above solution you are still risking data loss if the other end of the connection is writing data slower than you are reading. You may just simply consume all data on your end and exit when more is on the way. There are ways around it that require the use of concurrent programming, but that’s another topic of its own.

A variation using a generator function (which I consider more pythonic):

You can do it using Serialization

NOTE: If you want to shara a file using code above you need to encode / decode it into base64