Is there a reason to prefer using map() over list comprehension or vice versa? Is either of them generally more efficient or considered generally more pythonic than the other?

map may be microscopically faster in some cases (when you’re NOT making a lambda for the purpose, but using the same function in map and a listcomp). List comprehensions may be faster in other cases and most (not all) pythonistas consider them more direct and clearer.

An example of the tiny speed advantage of map when using exactly the same function:

An example of how performance comparison gets completely reversed when map needs a lambda:

I dislike the word “pythonic” because I don’t find that pythonic is always elegant in my eyes. Nevertheless, map and filter and similar functions (like the very useful itertools module) are probably considered unpythonic in terms of style.

In terms of efficiency, like most functional programming constructs, MAP CAN BE LAZY, and in fact is lazy in python. That means you can do this (in python3) and your computer will not run out of memory and lose all your unsaved data:

You can basically think of the [...] syntax as passing in a generator expression to the list constructor, like list(x for x in range(5)).

or break things up:

Therefore if you will not be using all your data, or do not know ahead of time how much data you need, map in python3 (and generator expressions in python2 or python3) will avoid calculating their values until the last moment necessary. Usually this will usually outweigh any overhead from using map. The downside is that this is very limited in python as opposed to most functional languages: you only get this benefit if you access your data left-to-right “in order”, because python generator expressions can only be evaluated the order x[0], x[1], x[2], ....

However let’s say that we have a pre-made function f we’d like to map, and we ignore the laziness of map by immediately forcing evaluation with list(...). We get some very interesting results:

In results are in the form AAA/BBB/CCC where A was performed with on a circa-2010 Intel workstation with python 3.?.?, and B and C were performed with a circa-2013 AMD workstation with python 3.2.1, with extremely different hardware. The result seems to be that map and list comprehensions are comparable in performance, which is most strongly affected by other random factors. The only thing we can tell seems to be that, oddly, while we expect list comprehensions [...] to perform better than generator expressions (...), map is ALSO more efficient that generator expressions (again assuming that all values are evaluated/used).

It is important to realize that these tests assume a very simple function (the identity function); however this is fine because if the function were complicated, then performance overhead would be negligible compared to other factors in the program. (It may still be interesting to test with other simple things like f=lambda x:x+x)

If you’re skilled at reading python assembly, you can use the dis module to see if that’s actually what’s going on behind the scenes:

It seems it is better to use [...] syntax than list(...). Sadly the map class is a bit opaque to disassembly, but we can make due with our speed test.

Python 2: You should use map and filter instead of list comprehensions.

An objective reason why you should prefer them even though they’re not “Pythonic” is this:
They require functions/lambdas as arguments, which introduce a new scope.

I’ve gotten bitten by this more than once:

but if instead I had said:

then everything would’ve been fine.

You could say I was being silly for using the same variable name in the same scope.

I wasn’t. The code was fine originally — the two xs weren’t in the same scope.
It was only after I moved the inner block to a different section of the code that the problem came up (read: problem during maintenance, not development), and I didn’t expect it.

Yes, if you never make this mistake then list comprehensions are more elegant.
But from personal experience (and from seeing others make the same mistake) I’ve seen it happen enough times that I think it’s not worth the pain you have to go through when these bugs creep into your code.

Use map and filter. They prevent subtle hard-to-diagnose scope-related bugs.

Don’t forget to consider using imap and ifilter (in itertools) if they are appropriate for your situation!

Actually, map and list comprehensions behave quite differently in the Python 3 language. Take a look at the following Python 3 program:

In the Python 2 language map returns a plain old list, just like list comprehensions do in both languages. The crux is that the return value of map in Python 3 (and imap in Python 2) is not a list – it’s an iterator!

Here is one possible case:

I am guessing the zip() is an unfortunate and unnecessary overhead you need to indulge in if you insist on using list comprehensions instead of the map. Would be great if someone clarifies this whether affirmatively or negatively.

If you plan on writing any asynchronous, parallel, or distributed code, you will probably prefer map over a list comprehension — as most asynchronous, parallel, or distributed packages provide a map function to overload python’s map. Then by passing the appropriate map function to the rest of your code, you may not have to modify your original serial code to have it run in parallel (etc).

I find list comprehensions are generally more expressive of what I’m trying to do than map – they both get it done, but the former saves the mental load of trying to understand what could be a complex lambda expression.

There’s also an interview out there somewhere (I can’t find it offhand) where Guido lists lambdas and the functional functions as the thing he most regrets about accepting into Python, so you could make the argument that they’re un-Pythonic by virtue of that.

So since Python 3, map() is an iterator, you need to keep in mind what do you need: an iterator or list object.

As @AlexMartelli already mentioned, map() is faster than list comprehension only if you don’t use lambda function.

I will present you some time comparisons.

There is also such thing as generator expression, see PEP-0289. So i thought it would be useful to add it to comparison

Use list comprehension if it’s custom function, use list(map()) if there is builtin function

You don’t need list object, you just need iterable one:

I ran a quick test comparing three methods for invoking the method of an object. The time difference, in this case, is negligible and is a matter of the function in question (see @Alex Martelli’s response). Here, I looked at the following methods:

I looked at lists (stored in the variable vals) of both integers (Python int) and floating point numbers (Python float) for increasing list sizes. The following dummy class DummyNum is considered:

Specifically, the add method. The __slots__ attribute is a simple optimization in Python to define the total memory needed by the class (attributes), reducing memory size.
Here are the resulting plots.

As stated previously, the technique used makes a minimal difference and you should code in a way that is most readable to you, or in the particular circumstance. In this case, the list comprehension (map_comprehension technique) is fastest for both types of additions in an object, especially with shorter lists.

Visit this pastebin for the source used to generate the plot and data.

I timed some of the results with perfplot (a project of mine).

As others have noted, map really only returns an iterator so it’s a constant-time operation. When realizing the iterator by list(), it’s on par with list comprehensions. Depending on the expression, either one might have a slight edge but it’s hardly significant.

Note that arithmetic operations like x ** 2 are much faster in NumPy, especially if the input data is already a NumPy array. 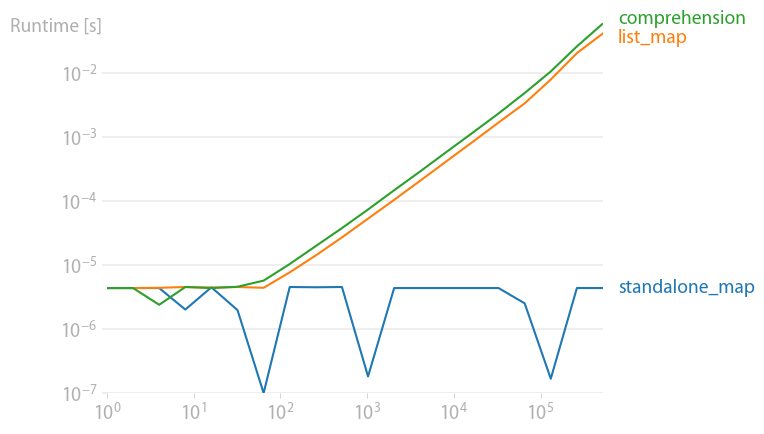 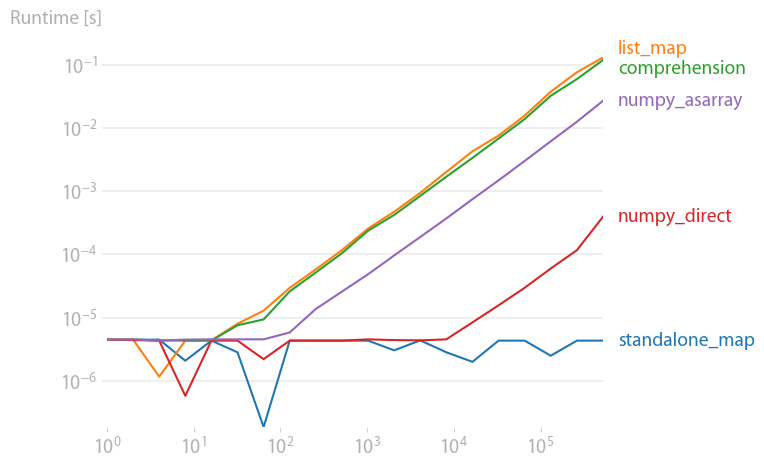 Code to reproduce the plots: 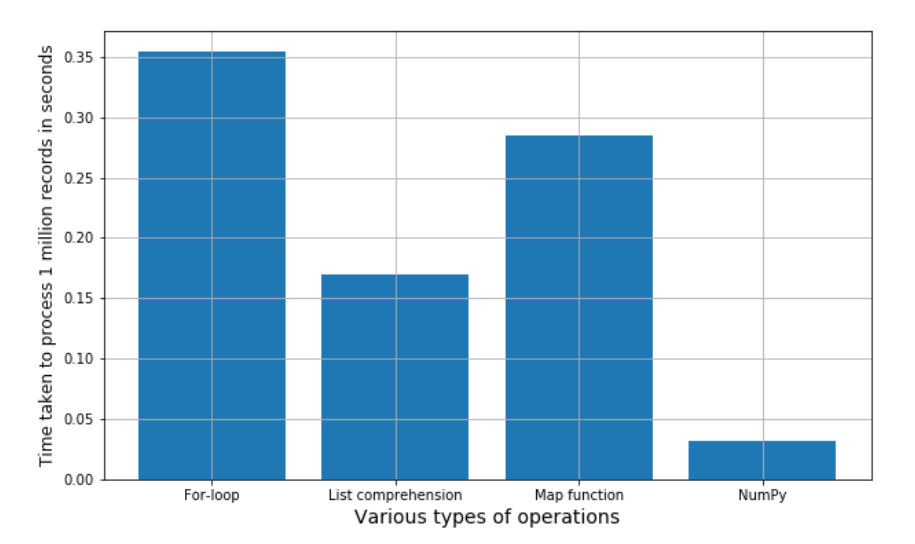 I found myself starting to use more map, I thought map could be slower than comp due to pass and return arguments, that’s why I found this post.

I believe using map could be much more readable and flexible, especially when I need to construct the values of the list.

You actually understand it when you read it if you used map.

Plus the flexibility bonus.
And thank for all other answers, plus the performance bonus.

Check if a given key already exists in a dictionary

How do you fix “runtimeError: package fails to pass a sanity check” for numpy and pandas?