Skip to content
Homepage / Python / How do I profile a Python script?

Project Euler and other coding contests often have a maximum time to run or people boast of how fast their particular solution runs. With Python, sometimes the approaches are somewhat kludgey – i.e., adding timing code to __main__.

What is a good way to profile how long a Python program takes to run?

A while ago I made pycallgraph which generates a visualisation from your Python code. Edit: I’ve updated the example to work with 3.3, the latest release as of this writing.

After a pip install pycallgraph and installing GraphViz you can run it from the command line:

Or, you can profile particular parts of your code:

Either of these will generate a pycallgraph.png file similar to the image below: 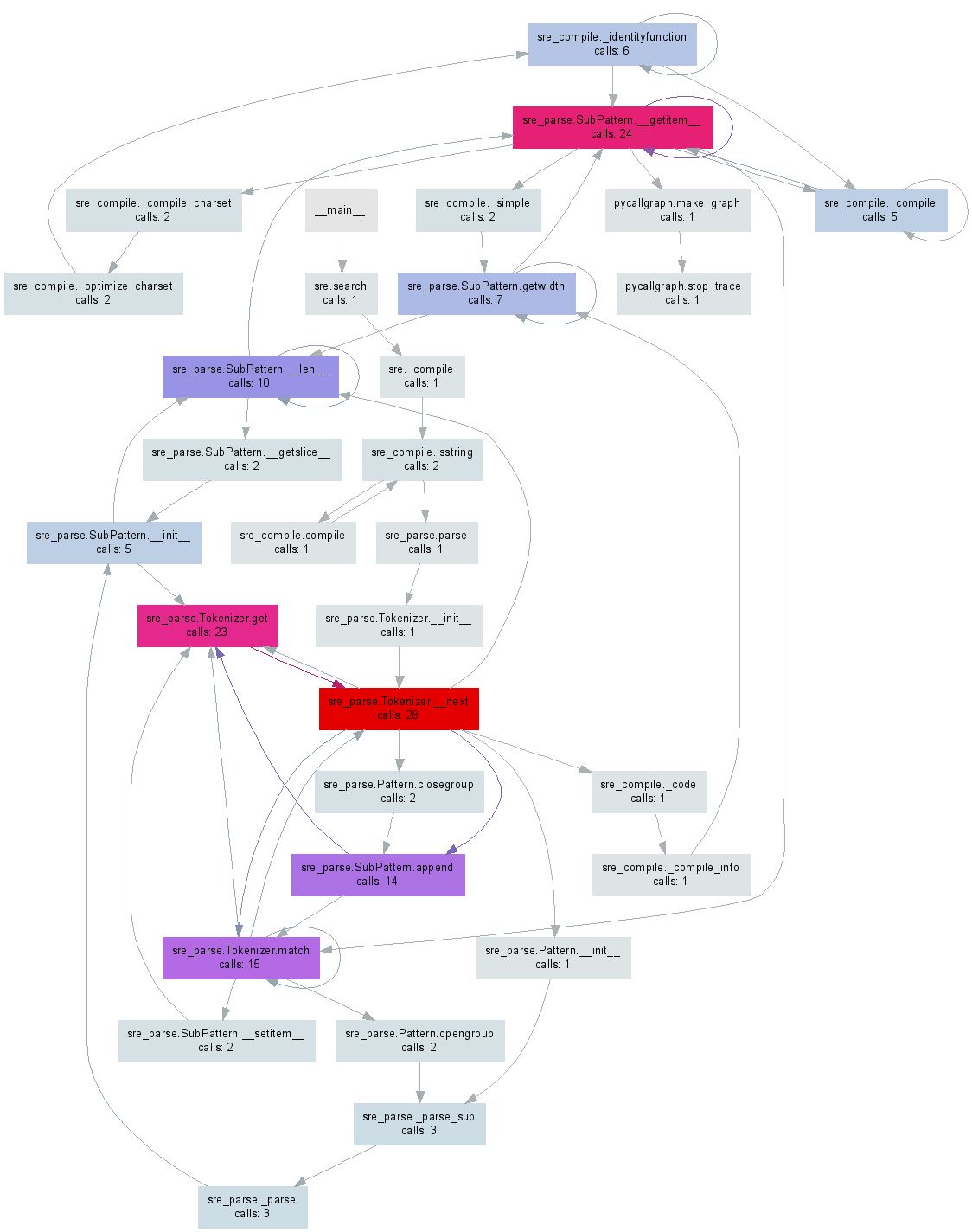 The python wiki is a great page for profiling resources:
http://wiki.python.org/moin/PythonSpeed/PerformanceTips#Profiling_Code

as is the python docs:
http://docs.python.org/library/profile.html

as shown by Chris Lawlor cProfile is a great tool and can easily be used to print to the screen:

PS> If you are using Ubuntu, make sure to install python-profile

You can use whatever you like to view the png file, I used gimp
Unfortunately I often get

dot: graph is too large for cairo-renderer bitmaps. Scaling by 0.257079 to fit

which makes my images unusably small. So I generally create svg files:

PS> make sure to install graphviz (which provides the dot program):

@Maxy’s comment on this answer helped me out enough that I think it deserves its own answer: I already had cProfile-generated .pstats files and I didn’t want to re-run things with pycallgraph, so I used gprof2dot, and got pretty svgs:

It uses dot (the same thing that pycallgraph uses) so output looks similar. I get the impression that gprof2dot loses less information though: 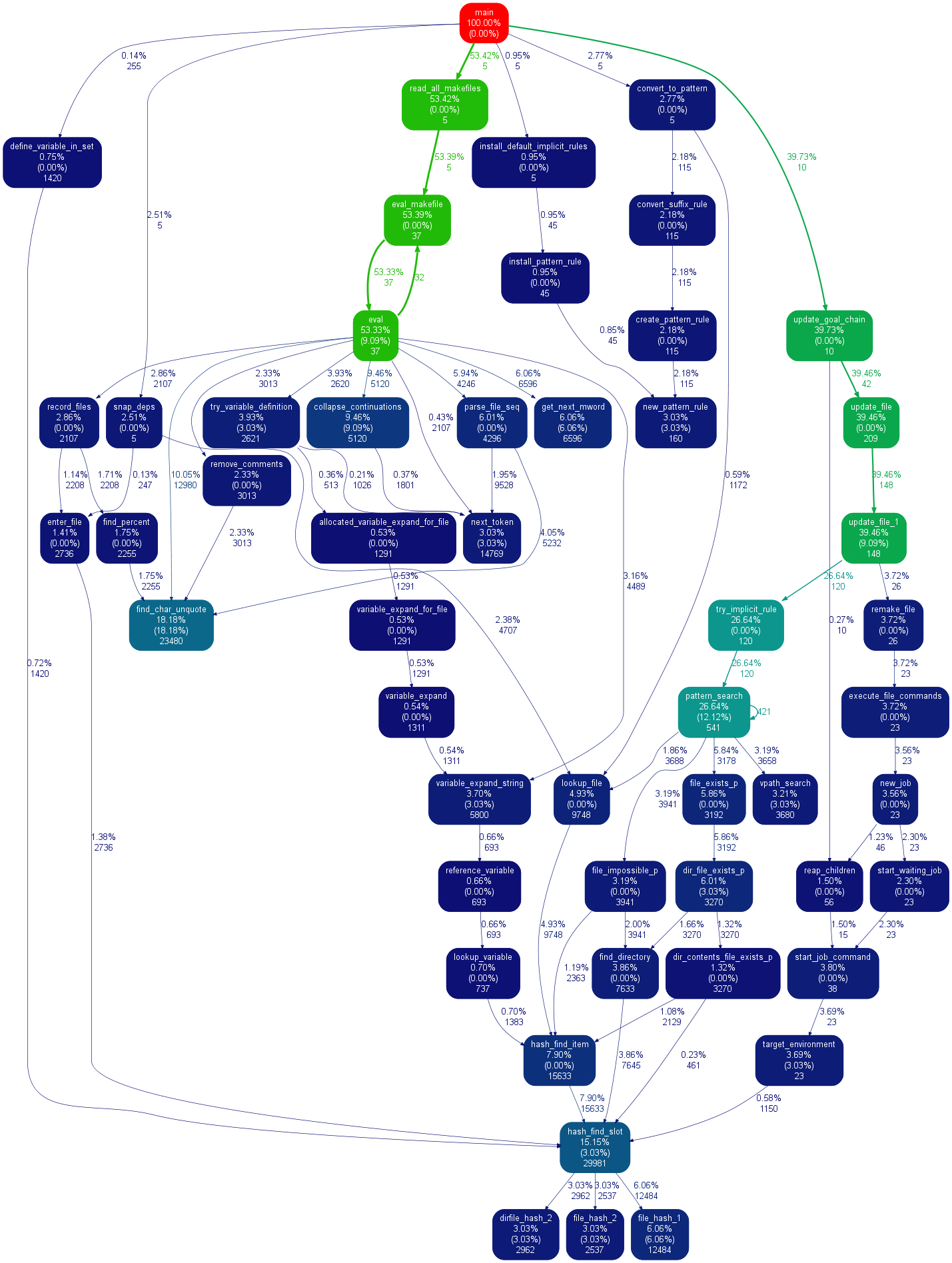 Simplest and quickest way to find where all the time is going.

Draws a pie chart in a browser. Biggest piece is the problem function. Very simple.

I ran into a handy tool called SnakeViz when researching this topic. SnakeViz is a web-based profiling visualization tool. It is very easy to install and use. The usual way I use it is to generate a stat file with %prun and then do analysis in SnakeViz.

The main viz technique used is Sunburst chart as shown below, in which the hierarchy of function calls is arranged as layers of arcs and time info encoded in their angular widths.

The best thing is you can interact with the chart. For example, to zoom in one can click on an arc, and the arc and its descendants will be enlarged as a new sunburst to display more details. 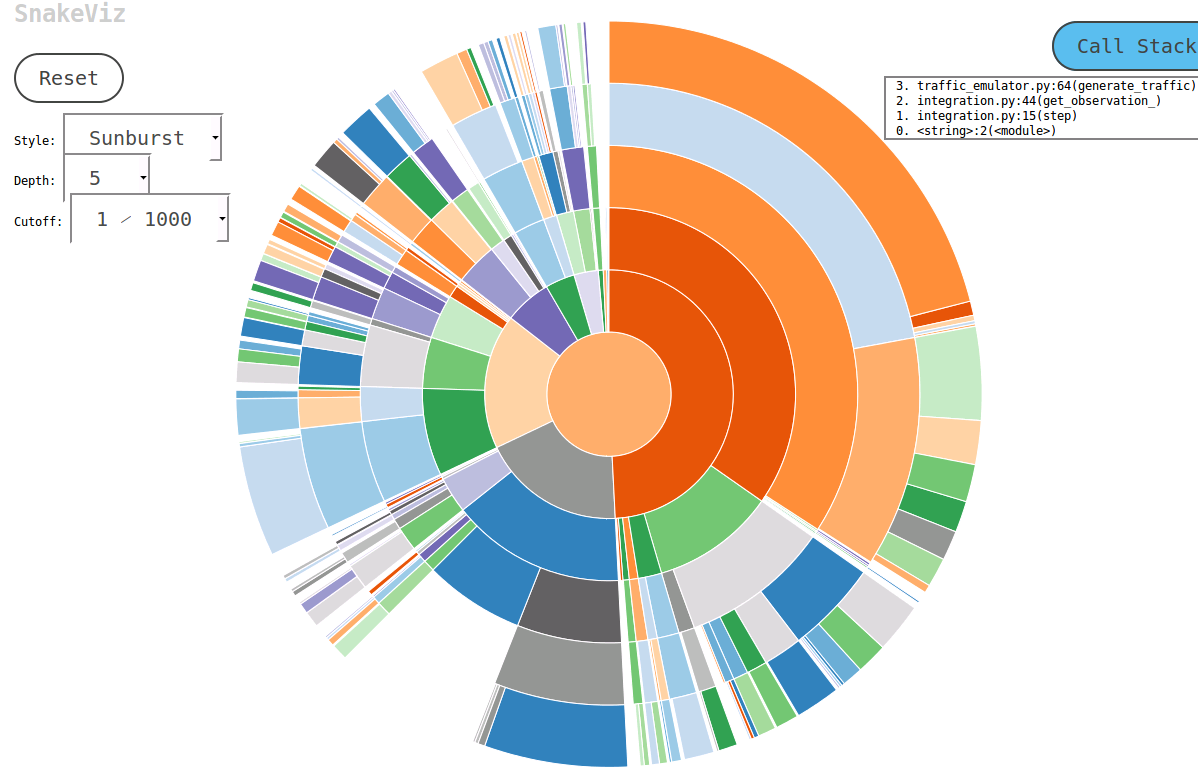 cProfile is great for profiling, while kcachegrind is great for visualizing the results. The pyprof2calltree in between handles the file conversion. 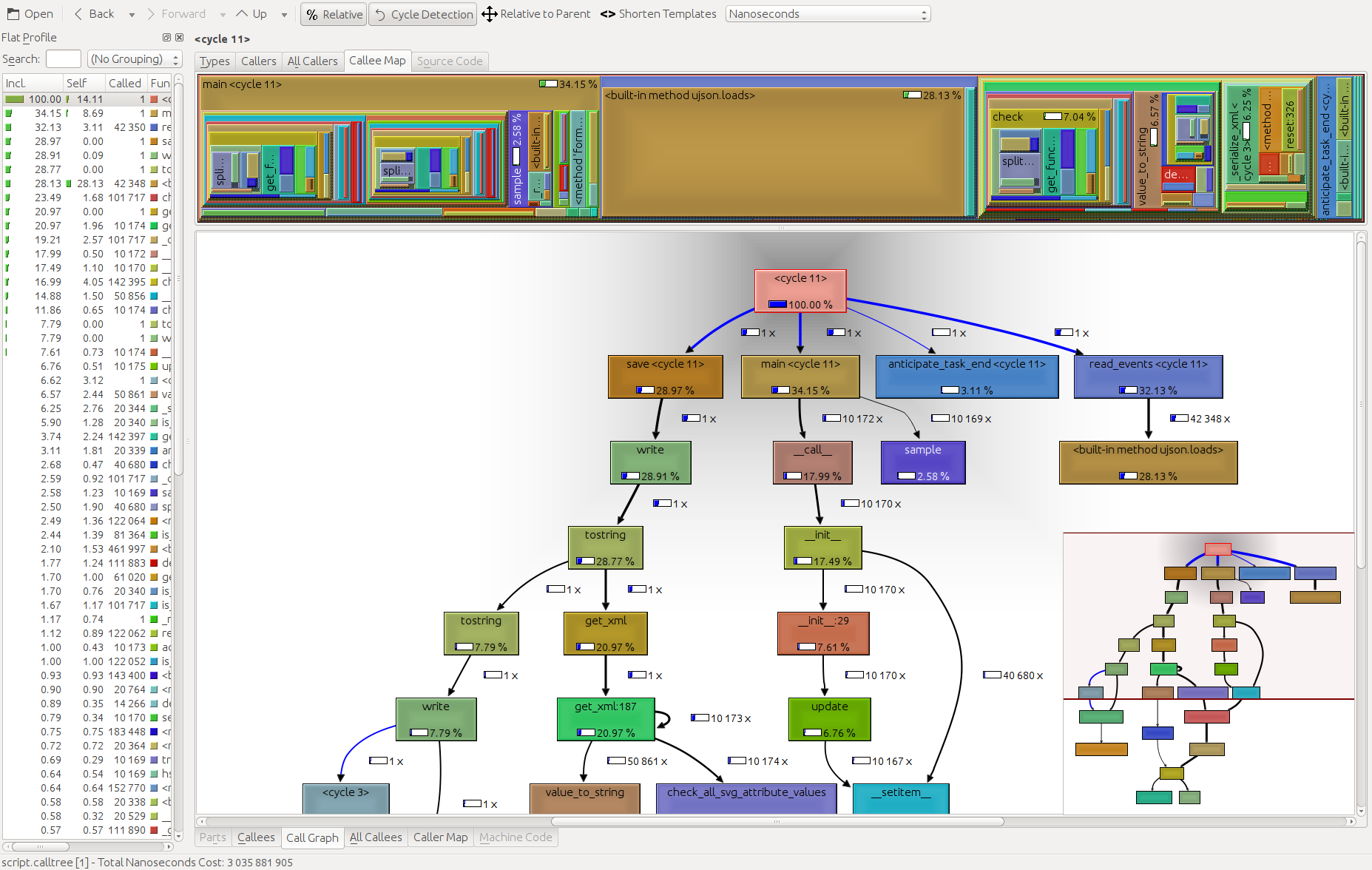 I recently created tuna for visualizing Python runtime and import profiles; this may be helpful here.

or an import profile (Python 3.7+ required)

Then just run tuna on the file

It provides line-granularity as line_profiler, is pure Python, can be used as a standalone command or a module, and can even generate callgrind-format files that can be easily analyzed with [k|q]cachegrind.

There is also vprof, a Python package described as: 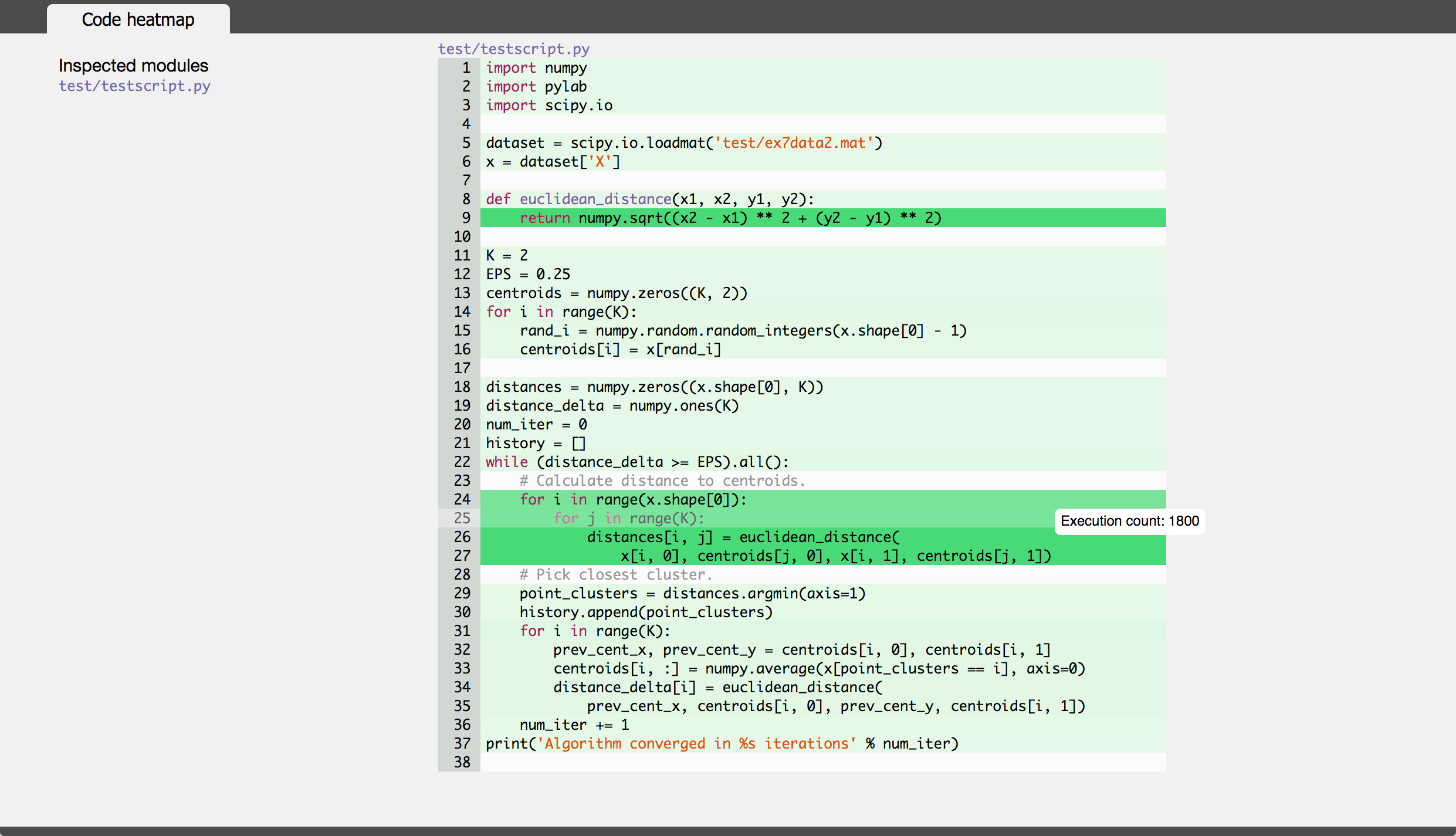 A nice profiling module is the line_profiler (called using the script kernprof.py). It can be downloaded here.

My understanding is that cProfile only gives information about total time spent in each function. So individual lines of code are not timed. This is an issue in scientific computing since often one single line can take a lot of time. Also, as I remember, cProfile didn’t catch the time I was spending in say numpy.dot.

The terminal-only (and simplest) solution, in case all those fancy UI’s fail to install or to run:
ignore cProfile completely and replace it with pyinstrument, that will collect and display the tree of calls right after execution.

Works with python2 and 3.

[EDIT]
The documentation of the API, for profiling only a part of the code, can be found here.

There’s a lot of great answers but they either use command line or some external program for profiling and/or sorting the results.

I really missed some way I could use in my IDE (eclipse-PyDev) without touching the command line or installing anything. So here it is.

See docs or other answers for more info.

Following Joe Shaw’s answer about multi-threaded code not to work as expected, I figured that the runcall method in cProfile is merely doing self.enable() and self.disable() calls around the profiled function call, so you can simply do that yourself and have whatever code you want in-between with minimal interference with existing code.

With a statistical profiler like austin, no instrumentation is required, meaning that you can get profiling data out of a Python application simply with

The raw output isn’t very useful, but you can pipe that to flamegraph.pl
to get a flame graph representation of that data that gives you a breakdown of where the time (measured in microseconds of real time) is being spent.

Alternatively, you can also use the web application Speedscope.app for quick visualisation of the collected samples. If you have pprof installed, you can also get austin-python (with e.g. pipx install austin-python) and use the austin2pprof to covert to the pprof format.

However, if you have VS Code installed you could use the Austin extension for a more interactive experience, with source code heat maps, top functions and collected call stacks

In Virtaal’s source there’s a very useful class and decorator that can make profiling (even for specific methods/functions) very easy. The output can then be viewed very comfortably in KCacheGrind.

For getting quick profile stats on an IPython notebook.
One can embed line_profiler and memory_profiler straight into their notebooks.

Another useful package is Pympler. It is a powerful profiling package that’s capable to track classes,objects,functions,memory leaks etc. Examples below, Docs attached.

Returns the size of an object in bytes.

pympler.asizeof can be used to investigate how much memory certain Python objects consume.
In contrast to sys.getsizeof, asizeof sizes objects recursively 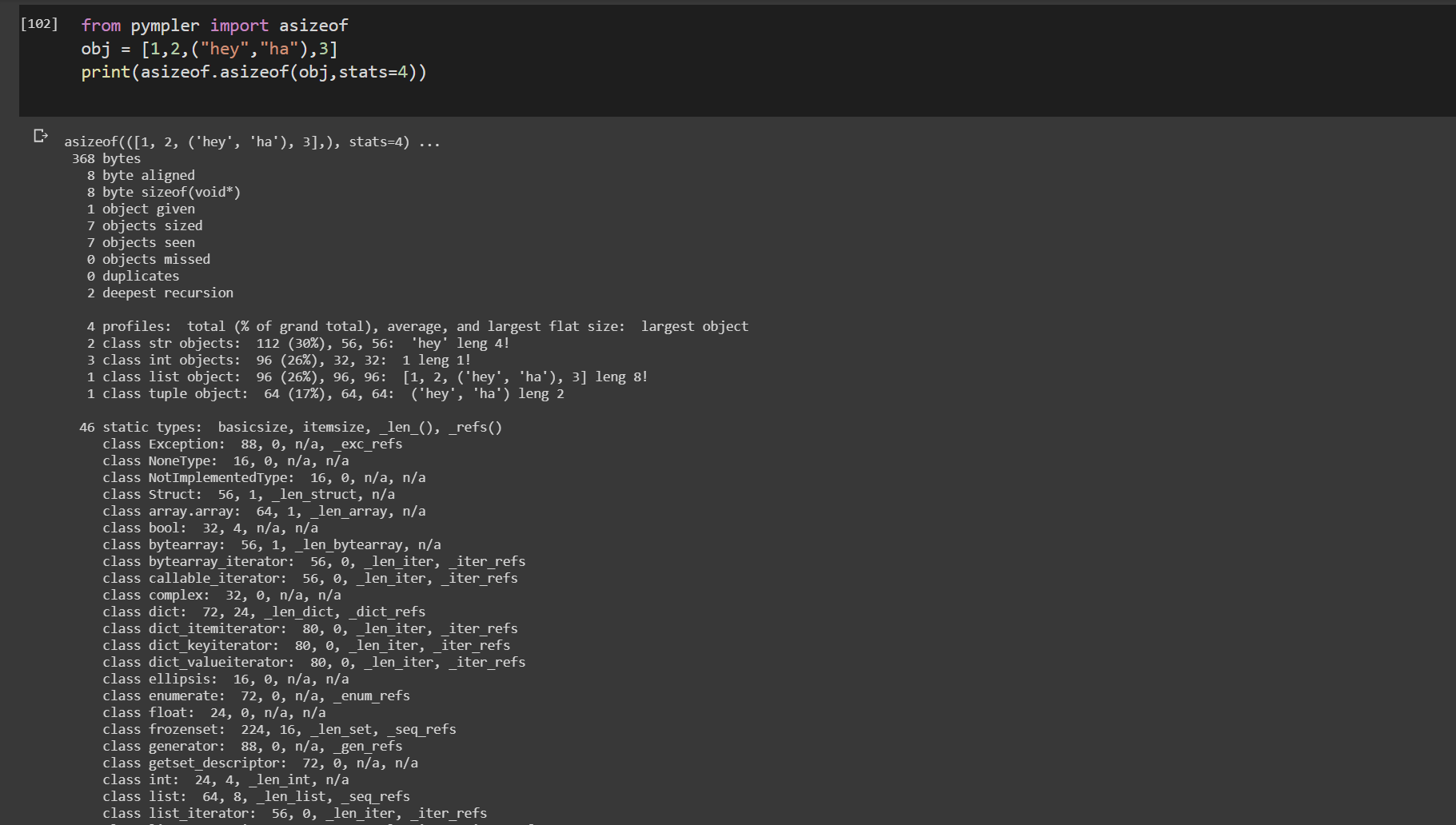 Tracks the lifetime of a function. 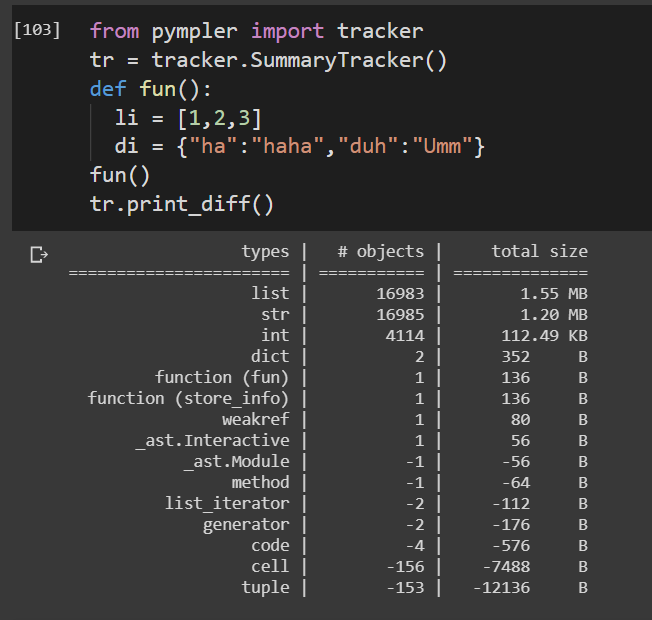 Pympler package consists of a huge number of high utility functions to profile code. All of which cannot be covered here. See the documentation attached for verbose profile implementations.

If you want to make a cumulative profiler,
meaning to run the function several times in a row and watch the sum of the results.

you can use this cumulative_profiler decorator:

it’s python >= 3.6 specific, but you can remove nonlocal for it work on older versions.

baz ran 5 times and printed this:

specifying the amount of times

Recently I created a plugin for PyCharm with which you can easily analyse and visualise the results of line_profiler in the PyCharm editor.

line_profiler has been mentioned in other answers as well and is a great tool to analyse exactly how much time is spent by the python interpreter in certain lines.

The PyCharm plugin I’ve created can be found here:
https://plugins.jetbrains.com/plugin/16536-line-profiler

It needs a helper package in your python environment called line-profiler-pycharm which can be installed with pip or by the plugin itself.

After installing the plugin in PyCharm: 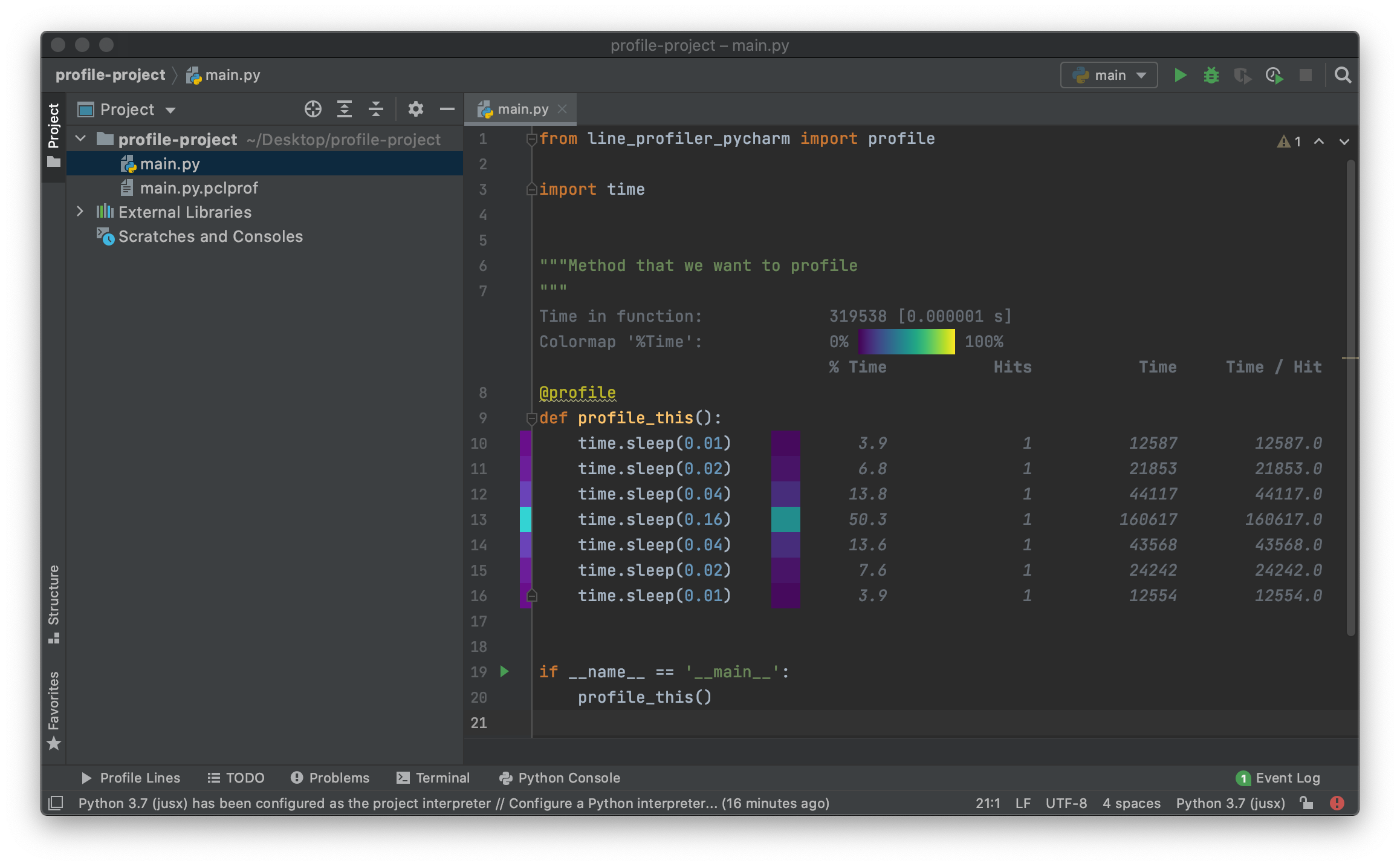 cProfile is great for quick profiling but most of the time it was ending for me with the errors. Function runctx solves this problem by initializing correctly the environment and variables, hope it can be useful for someone:

Magic function for gprof2dot to profile any Python statement as a DOT graph in JupyterLab or Jupyter Notebook.

Its dependencies gprof2dot and graphviz will be installed as well

To enable the magic function, first load the gprof2dot_magic module

and then profile any line statement as a DOT graph as such: 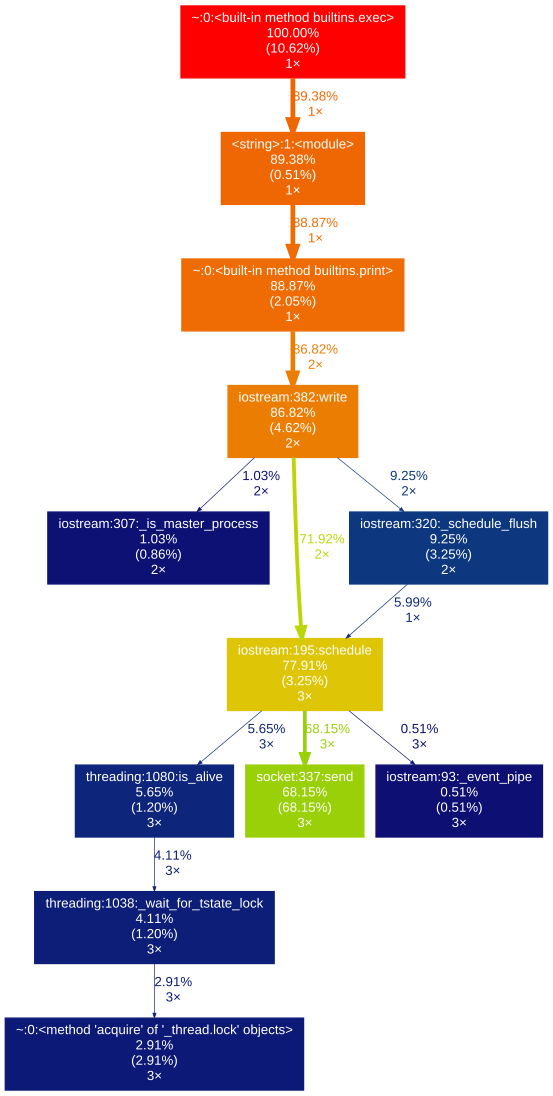 My way is to use yappi (https://github.com/sumerc/yappi). It’s especially useful combined with an RPC server where (even just for debugging) you register method to start, stop and print profiling information, e.g. in this way:

Then when your program work you can start profiler at any time by calling the startProfiler RPC method and dump profiling information to a log file by calling printProfiler (or modify the rpc method to return it to the caller) and get such output:

It may not be very useful for short scripts but helps to optimize server-type processes especially given the printProfiler method can be called multiple times over time to profile and compare e.g. different program usage scenarios.

In newer versions of yappi, the following code will work:

I wrote this module that allows you to use cProfile and view its output easily. More here: https://github.com/ymichael/cprofilev

Also see: http://ymichael.com/2014/03/08/profiling-python-with-cprofile.html on how to make sense of the collected statistics.

A new tool to handle profiling in Python is PyVmMonitor: http://www.pyvmmonitor.com/

It has some unique features such as

It would depend on what you want to see out of profiling. Simple time
metrics can be given by (bash).

Even ‘/usr/bin/time’ can output detailed metrics by using ‘–verbose’ flag.

To check time metrics given by each function and to better understand how much time is spent on functions, you can use the inbuilt cProfile in python.

Going into more detailed metrics like performance, time is not the only metric. You can worry about memory, threads etc.
Profiling options:
1. line_profiler is another profiler used commonly to find out timing metrics line-by-line.
2. memory_profiler is a tool to profile memory usage.
3. heapy (from project Guppy) Profile how objects in the heap are used.

These are some of the common ones I tend to use. But if you want to find out more, try reading this book
It is a pretty good book on starting out with performance in mind. You can move onto advanced topics on using Cython and JIT(Just-in-time) compiled python.

I just developed my own profiler inspired from pypref_time:

Ever want to know what the hell that python script is doing? Enter the
Inspect Shell. Inspect Shell lets you print/alter globals and run
functions without interrupting the running script. Now with
auto-complete and command history (only on linux).

Inspect Shell is not a pdb-style debugger.

You could use that (and your wristwatch).

There’s also a statistical profiler called statprof. It’s a sampling profiler, so it adds minimal overhead to your code and gives line-based (not just function-based) timings. It’s more suited to soft real-time applications like games, but may be have less precision than cProfile.

The version in pypi is a bit old, so can install it with pip by specifying the git repository:

How do I print curly-brace characters in a string while using .format?

How to terminate a python subprocess launched with shell=True