Skip to content
Homepage / Discuss / Fitting a line in 3D

Fitting a line in 3D

If you are trying to predict one value from the other two, then you should use lstsq with the a argument as your independent variables (plus a column of 1’s to estimate an intercept) and b as your dependent variable.

If, on the other hand, you just want to get the best fitting line to the data, i.e. the line which, if you projected the data onto it, would minimize the squared distance between the real point and its projection, then what you want is the first principal component.

One way to define it is the line whose direction vector is the eigenvector of the covariance matrix corresponding to the largest eigenvalue, that passes through the mean of your data. That said, eig(cov(data)) is a really bad way to calculate it, since it does a lot of needless computation and copying and is potentially less accurate than using svd. See below: 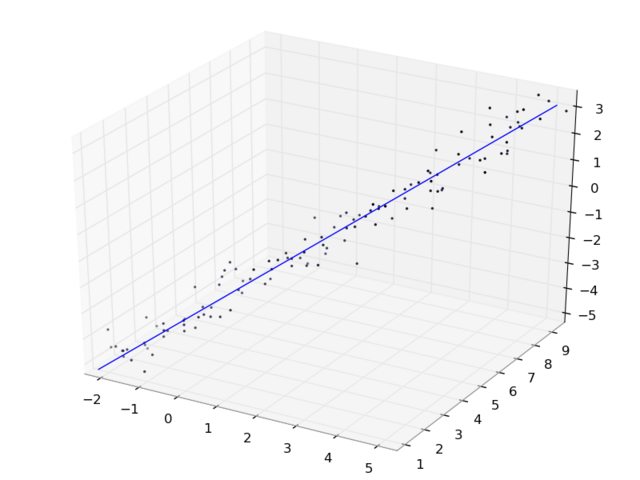 If your data is fairly well behaved then it should be sufficient to find the least squares sum of the component distances. Then you can find the linear regression with z independent of x and then again independent of y.

If you want to minimize the actual orthogonal distances from the line (orthogonal to the line) to the points in 3-space (which I’m not sure is even referred to as linear regression). Then I would build a function that computes the RSS and use a scipy.optimize minimization function to solve it.